Bash Brain is a Madball introduced in Amtoy Series 1. He is a head with an exposed brain. He was originally called Crack Head, but was changed to Bash Brain due to the term "crack head" also being a slang term for a drug user. He is confirmed to return in an upcoming unannounced wave in the Just Play era, as proven on the Madballs page found on the American Greetings Entertainment website.

Bash Brain in the ComicsEdit

Bash Brain was one of the original Madballs created when eight rubber balls were exposed to the mutagenic properties of the toxic pond near R.U.I.N. True to his name, he is the most intelligent of the Madballs.

Bash Brain in the VHS CartoonsEdit

In the two VHS cartoons, Bash Brain first made a brief cameo in Escape from Orb as one of the inhabitants of the planet Orb being forced to build the monument of Wolf Breath. Here, he is depicted with purple skin and has a hook for a hand and a peg leg. He appears again in the second episode Gross Jokes, where he is voiced by Len Carlson and has an appearance more like the original toy, except he also has hairy arms and legs. His full name is stated to be Douglas B. "Sock-Up-His-Nose" Bash Brain III. It is unknown why his appearances in the two episodes are different. 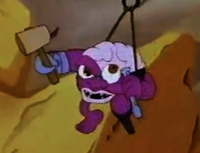 Bash Brain as seen in Escape from Orb 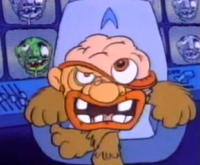 Bash Brain as seen in the intro to Gross Jokes 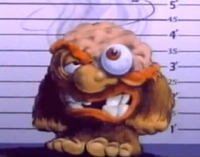 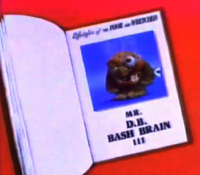 Bash Brain in 1985, where he was called Crack Head 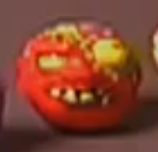 Bash Brain in 2007
Add a photo to this gallery
Retrieved from "https://madballs.fandom.com/wiki/Bash_Brain?oldid=4796"
Community content is available under CC-BY-SA unless otherwise noted.