Dust Brain is a Madball introduced in Amtoy Series 1. He is a teal-skinned mummy with a crooked grill of rotting teeth. He was the playable character in the Madballs video game. In the Just Play era, he is depicted as a food-loving gassy dope known for his nasty farts.

Dust Brain in the Comics

|<3 >Dust Brain was one of the original Madballs created when eight rubber balls were exposed to the toxic pond near R.U.I.N. His bandages tend to come in handy in situations that require tying things together.

Dust Brain in the VHS Cartoons

In the Madballs 80's animated VHS cartoons, Dust Brain was redesigned as a female and given the name Dusty Dustbrain. She was voiced by Jeri Craden. She is the most intelligent of the Madballs and was the one who came up with the idea to escape to Earth after their planet Orb was conquered by Wolf Breath. She claims to have heard music was still legal on Earth "from the grapevine". She plays the bass guitar.

Dust Brain in the Wildbrain Cartoons

Unlike in the VHS cartoons, Dust Brain did not change gender and remained a male in the Wildbrain/Oddbot cartoons on YouTube. He is depicted as a laid-back, dopey food-lover. He has a frequent habit of letting loose large and stenchy farts. 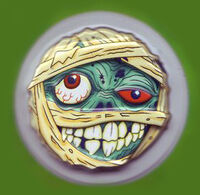 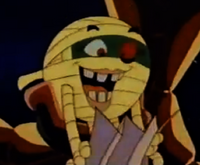 Dusty as seen in Escape from Orb 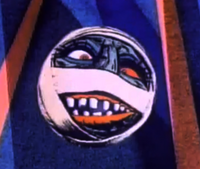 Dusty in the intro to Gross Jokes 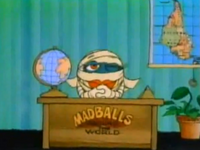 Dusty as seen in Gross Jokes