Freakella is a Madball exclusive to the VHS cartoons. No mention of her has ever been made since then. She has a Bride of Frankenstein-esque appearance and was voiced by Cree Summer in the first cartoon and Taborah Johnson in the second. She was the lead singer of the Madballs rock band and even sang the theme song of the show.

As a rocker chick, Freakella is well-meaning, but can really lose her temper if someone even dares call her a "Mophead". She is also pretty vain, as shown when she complained about Wolfbreath's grueling labors ruining her manicure. Her vanity was also shown in the introduction to Gross Jokes when she makes a comical reaction to her mirror breaking after seeing her reflection. It has been implied that she has a relationship with Screamin' Meemie, due to their tendency to be extremely loud. 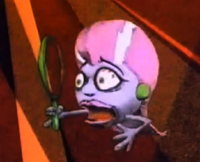 Freakella in the intro to Gross Jokes

As seen in Gross Jokes
Community content is available under CC-BY-SA unless otherwise noted.
Advertisement