Oculus Orbus is a Madball introduced in Amtoy Series 1. He is a giant bloodshot eyeball, and sports a mouth in the Just Play era. He is a playable character in the video game Madballs in Babo: Invasion, and he and Horn Head are the only playable characters to actually be Madballs. Oculus is currently portrayed as a fun-loving joker.

Oculus Orbus in the Comics

Oculus Orbus was created along with the rest of the original Madballs when eight rubber balls fell into the toxic pond near R.U.I.N. He tended to act as the de facto leader of the Madballs. Despite not having a mouth, Oculus could talk. He has a tendency of making puns on eyes and eye-related words. He mainly got along with Fist Face, as they are both based on body parts. They both enjoy singing "Eye of the Tiger" at karoke.

Oculus Orbus in the VHS Cartoons

In the animated VHS cartoons, Oculus Orbus first appears in Escape from Orb. He was voiced by Len Carlson and is too nervous to speak (possibly also due to his lack of a mouth), instead communicating using squeaks and hand gestures. He often warns the other Madballs when the Badballs infiltrate their concerts. For unknown reasons, he was left behind when the Madballs escaped to Earth. He wore a red cap. In Gross Jokes, Oculus appears in some of the skits, having somehow made it to Earth after being left behind on Orb. Here, he wears a bowler hat.

Oculus Orbus in the Wildbrain Cartoons

In the Wildbrain/Oddbot shorts on YouTube, Oculus is portrayed as a joke-telling, talkative, fun-loving eyeball. Unlike his previous animated incarnation, he can speak, thanks to the mouth that was added to his design for the Just Play relaunch. 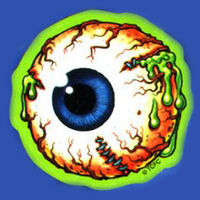 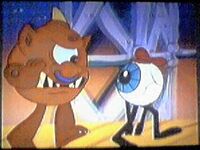 Oculus Orbus with Horn Head as seen in Escape from Orb 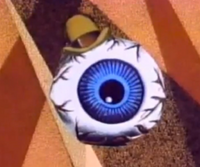 Oculus Orbus in the intro to Gross Jokes 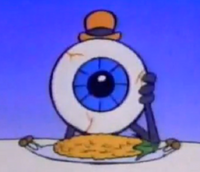 Oculus laughing at his joke.
Community content is available under CC-BY-SA unless otherwise noted.
Advertisement