Screamin' Meemie is a Madball introduced in Amtoy Series 1. He is a living baseball with round eyes, bushy eyebrows, a human-like nose, and a manic screaming expression. In the Just Play era, he is depicted as short-tempered, and has serious anger issues, although his self-written poetry very rarely helps soothe himself.

Screamin' Meemie in the Comics

Screamin' was one of the first Madballs created when eight rubber balls fell into the toxic pond near R.U.I.N. and mutated. Being the most prominent Madball, he tended to be the spokesman. It was shown in Corn-Ered! that Screamin' Meemie can burn white-hot if he is angered enough.

Screamin' Meemie in the VHS Cartoons

In the VHS cartoons, Screamin' Meemie was voiced by Geoffrey Bowes. Here, he wears attire appropriate for him being a baseball, namely a baseball cap and cleats. He is often portrayed as the leader of the Madballs and plays the drums. Some hints in the two cartoons may imply that he has a relationship with Freakella. It is interesting to note that while his baseball cap is blue in the first episode, it is red in the second episode and is red and blue in the intro.

Screamin' Meemie in the Wildbrain Cartoons

Screamin Meemie is portrayed with a serious anger problem and a short temper, and often springs into an outburst of furious screams and yells when pushed to the limit. Despite this, he also happens to write calm, soothing poems. 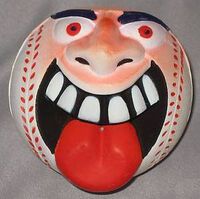 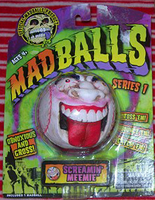 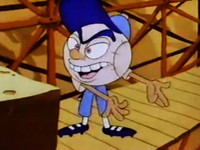 Screamin' Meemie as seen in Escape from Orb 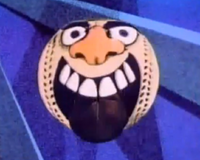 Screamin' Meenie in the intro to Gross Jokes 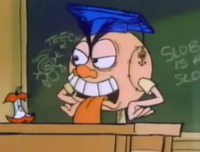 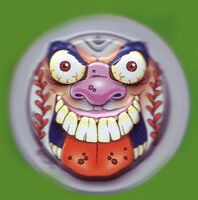 Screamin' Meemie gives the other Madballs an earful of his fury.
Community content is available under CC-BY-SA unless otherwise noted.
Advertisement