Start a Wiki
Skull Face is a Madball introduced in Amtoy Series 1. He is a grinning skull with large eye sockets, and has a black tounge sticking out with a spider on it in the Art Asylum relaunch. In the Just Play era, he appears closer to his original design, except his eye sockets are squinted, and his exposed brain is now sentient, and is named Lobe. Skull Face is currently depicted as an evil mastermind who is constantly plotting to rule the Earth, but Lobe gets in the way of every scheme.

Skull Face in the ComicsEdit

Skull Face was one of the original Madballs created when eight rubber balls fell into the toxic pond near R.U.I.N. Skull Face was noted for his ability to scare people with his skeletal countenance.

Skull Face in the VHS CartoonsEdit

In the VHS cartoons, Skull Face (on one occasion referred to as Numbskull Face) was voiced by John Stocker and wore a tall top hat. He notably stutters a lot when he speaks (possibly because he has become very nervous since Commander Wolfbreath took over the planet). He played the keyboard.

Skull Face in the Wildbrain CartoonsEdit

In the YouTube cartoons by Wildbrain, Skull Face attempts to dominate the Earth, and even has a catchphrase: "Eat my evil!". His sentient brain, Lobe, however, always ruins each and every evil scheme of his. 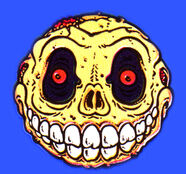 Skull Face's art from the original series by Amtoy.

Skull Face in Escape from Orb

Skull Face in the intro to Gross Jokes 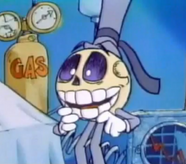 Lobe using his telepathic powers.
Add a photo to this gallery
Retrieved from "https://madballs.fandom.com/wiki/Skull_Face?oldid=4556"
Community content is available under CC-BY-SA unless otherwise noted.