Slobulus is a Madball introduced in Amtoy Series 1. He is an ugly green booger monster with messy hair and one eye hanging from the socket, who constantly drools, and licks his nose with a slight smile in the Art Asylum relaunch. In the Just Play Era, it is said that he can't take a joke, tell a joke, and hates how he is often the butt of jokes. He often sneezes, and can also snort out hands made out of snot.

Slobulus was one of the original Madballs created when eight rubber balls were mutated by the toxic pond near R.U.I.N. Slobulus' slime has been useful, mainly on an occassion where an alien named Rojad needed it to fuel his ship.

Slobulus in the VHS Cartoons

Slobulus was voiced by Dan Hennessey in the VHS cartoons, and was best friends with Aargh. He was the dumbest of the duo and they had a tendency to argue and fight. Slobulus often has moments of dumb luck, such as finding the micro ion compressor needed to finish a spaceship they were building to escape to Earth with the Madballs. He was also shown to be technologically-savvy at one point where he rewired the Badballs' spaceship to send them back into space.

Slobulus in the Wildbrain Cartoons

In the Wildbrain/Oddbot cartoons on YouTube, Slobulus has a tendency to sneeze a lot, even leaving Oculus Orbus covered entirely in snot in "Mad Pets". He also has been shown to sneeze out hands made of snot, as seen in "Cinemad". 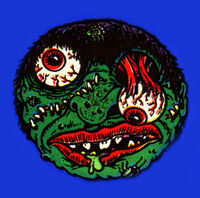 Slobulus' artwork from the original series. 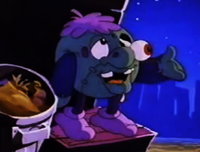 Slobulus as seen in Escape from Orb 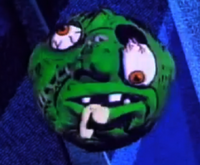 Slobulus in the intro to Gross Jokes 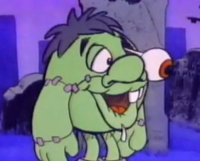 Slobulus as seen in Gross Jokes

Slobulus sneezes out a hand made of snot.

Slobulus after sneezing all over Oculus Orbus.
Community content is available under CC-BY-SA unless otherwise noted.
Advertisement